Catching worms is a case of practice makes perfect. Its harder than it looks. However, once you get the hang of it, you will be pulling them out of the sand like a Pro.

The question is, how do you do it? The best way is to learn from the best. Watch the video and see how it is done.

How to catch beach worms?

Dave, Rusty and the boys are out catching Beach Worms on Fraser Island? In this video they show you the techniques they use to catch and store Beach worms.

Worms – brightly coloured with food dye – use as bait for fishing on Fraser Island.

Middle beach is the best place for worming on Fraser Island

To find a good one you need to look along the shore line and find a spot that has slightly higher ground where perhaps the incoming waves don’t quite reach the high point or just cover the bank with shallow wave wash.

Stinker and the bait

You need a STINKER – this is basically a piece of rotten old meat or old fish frames that are placed in a netted bag. Keep it as simple as a net orange or onion bag, tie a piece of rope to the end of it.

Swing it from side to side closest to the beach. Tread lightly on the sand.

Remember the worms are under your feet hidden in the sand. They feel every movement and vibration so you don’t want to scare them away.

Nothing worse than having a huge wave surge push you over unexpectedly.

The Bait. Get yourself a pippi or piece of the rotten meat as the worm lure to bring the worm to the surface.

You need this in addition to the Stinker.

Bait and the worm

Entice the worm to the surface with the stinky bait.

This is the trickiest part as they have good sensors and react to the slightest movement. You really need to get ino stealth mode.

Worm arching up to grab the bait

Now as he’s going to go after the bait again. Position yourself to get a good hold of him.

Once he grabs it, he will arch a bit, pull the bait away and try to pull him out a bit, while moving your fingers in a bit closer. Then he will arch up again – if you move in slowly he won’t be able to feel it. Then you can grab him.

Grabbing beach worms in the sand on Fraser Island

Once you have caught some worms, you need to remove the slime from their body and roll them in dry sand to preserve them.

De-snotting and sanding the beach worms shortly after catching them

We also add a little red food colouring when we bag them. This makes them more alluring as bait when we use them for fishing.

Store in the fridge or freeze. 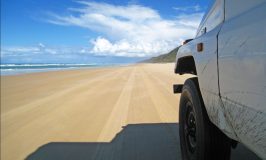 Driving on Fraser Island can have its moments. The terrain on the island is so varied and in some places can be extremely hazardous. In general driving on the beach at low tide when the sand is … END_OF_DOCUMENT_TOKEN_TO_BE_REPLACED