Tourists are shocked to know that there is an active Police presence on Fraser Island. The official Police Station is located on the Eastern beach at Eurong.

The police do regularly patrol the beaches.

They are regularly in force, generally ensuring that people are being responsible and doing the right thing.

Read on to learn more.

Speeding is dangerous particularly in the sand and signs must be followed for driving safety.

Sand Roll-overs are a common accident and cause serious injuries and deaths every year.

Follow the rules, be aware and avoid a fine, loss of demerit points or a loss of your life or that of someone else.

Here is a guide of general speed limits around the island to be aware of :

The Queensland Police Service (QPS) is responsible for law and order on Fraser Island. The QPS work closely with the Department of National Parks, Recreation, Sport and Racing (DNRSR) to provide a safe environment for tourists and locals on the island.

The police officers who patrol the beaches are highly visible and are there to provide a sense of safety for those who visit the island.

They work closely with the local community and are always looking out for any suspicious behaviour.

The police officers often work with the DNRSR rangers to prevent illegal camping on closed sections of Fraser Island, as well as preventing littering and other anti-social behaviour.

They are extra vigilant with people not wearing seatbelts and drivers speeding in the 40km/h zones.

Watch Our For 40km/h Signs on Fraser

The island can be extremely busy and sometimes chaotic during peak summer times.

If you are driving your own vehicle onto the island you need to follow all Queensland road rules.

Here are some other helpful hints when driving around the island 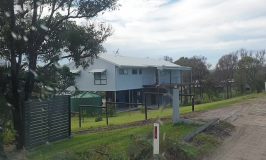 The drive from Hook Point to Orchid Beach is a total of approximately 105 km and can take anywhere from 2-3 hours depending on the actual beach conditions, the weather and the prevailing … END_OF_DOCUMENT_TOKEN_TO_BE_REPLACED