You are here: Home / Fishing / The Best Land Based Fishing Spot On The Fraser Coast – Hervey Bay Jetty

Here we are off to Fraser again, we’ve got some mates coming from Sydney we are doing a trip across to the island.

We all got in late last night, so we are a bit tired this morning.

We are going to get groceries shortly, but we just had to come past the jetty and have a look because it’s one of the (I reckon) one of the best land-based spots to go for a fish around here (Hervey bay) you can pretty much catch everything off this Jetty.

Whiting in close here, then in the middle there, just the other side of the SandBar we can catch squid and then you can catch tuna and mackerel and things out on the end, and there is a lot of big brim underneath it.

This Jetty is a superb land-based spot.

The Tide’s reasonably low at the moment, so we’d normally go and pump some yabbies. If we want to catch Whiting.

The Whiting are sort of in the shallows along here and then further out you get your squid and tuna and mackerel and stuff like that.

Once the tide comes in and this all fills in, then you can fish closer and closer to the bank.

Right now there are just tons of yabby holes down there, to get yabbies, so you don’t have to go far from the Jetty to get the yabbies. You just need your yabby pump.

So if you do come and stay in the bay on the way over to Fraser, it’s definitely good to spend a couple of days here and do all this stuff. If you’ve got kids it’s a fantastic land-based spot for them to fish from.

Further out on the Jetty, I don’t know if it’ll show up in the film but there’s a large school of Whiting there. They’re not that big, probably about 20 to 25 centimetres probably 15 of them there.

This young fellow up here will be chasing the Whiting.

There’s a stingray mosying past there.

Just talking to one of the lads then and he said um yesterday you got a couple of flat heads of these soft Plastics here just in the shallows.

There are tons of sardines and Herring around the Jetties, if you want to catch the Tuna and the mackerel or another fish like that use the little Herring Jigs. Jig the sards up and put them on.

You should be able to see, that it’s a massive School Herring down there you can see them turning on the sides. This would be a prime spot to jig from, you should be able to catch them easily and then float them out as liveies. They often use a balloon just so they don’t go to the bottom.

Down around that point at the mouth of the Mary River, I think it is Riverhead’s. That’s where you catch the ferry from. So that’s over there.

That is big Woody up there and then that’s Fraser Island off in the background gets hard to see with the early morning sun but that’s where we’re headed. 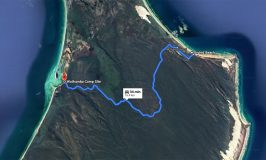 We're just heading over to Wathumba Creek today for some fishing. We've had a little bit of rain so the tracks are actually pretty good but still, it pays to take it nice and steady. … END_OF_DOCUMENT_TOKEN_TO_BE_REPLACED